In the summer of 2020, a couple contacted Total Basement Finishing of WNY because they were thinking about remodeling their basement. They weren't too sure what they wanted to do with their full basement yet, but they knew that they were ready to start planning ahead for what they could do in the future.

Our Design Specialist Pierce Hicks met with the couple, and after talking with them found that they weren't ready to finish the whole basement yet. They had a lot of ideas and weren't sure what they really wanted to do yet. Making a separate bedroom and gym area, just finishing the exterior walls, and leaving the space open were the top ideas, along with creating separate storage space. The couple wasn't sure what their perfect finished basement looked like for them yet, but they knew that they would need an egress window in it no matter what for safety in the future.

They chose to hold on to a full basement finishing project for now and to have Total Basement Finishing of WNY install an egress window for them this year.  The couple decided on a Bowman Kemp egress window system which includes the window well, an escape ladder, well cap, and the escape window. They had some amazing bushes in front of the perfect place for the egress window system to go into and agreed to remove these before the installation started.

It is always really frustrating when the seal around an egress window fails, and it can be very stressful for homeowners. As there was only a small amount of water seeping in, later that week when things had dried we sent out an installation team to inspect and repair the seal. We waited a few weeks to finish the area around the window to make sure that the seal wouldn't fail again.  This made the job take a lot longer than expected to finish, but the homeowners agreed that it was worth it to wait to be sure that their basement would not only be safe but also be dry for years to come. 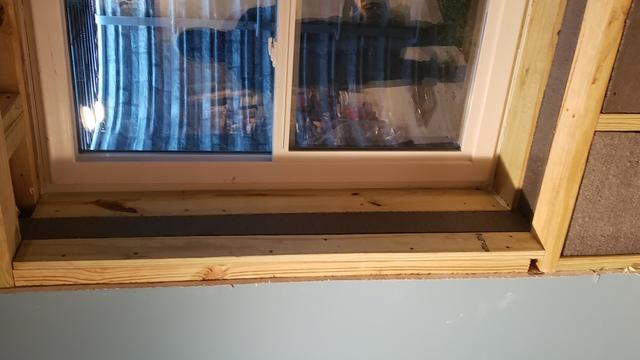 The Bowman Kemp egress window well shows through the installed safety window. This photo was taken after the seal was repaired and the frame was installed around the egress window to allow Total Basement Finishing of WNY to install a piece of our paintable panels over the wooden frame by the Bowman Kemp Egress window so the homeowners could paint it as they wished for the interim before finishing the rest of their basement.