The first impression of the company was great, the Design Specialist was outgoing and knowledgeable of the company. He totally sold the project.  There were some issues during the project but the end result was great. The Installation Crew did an excellent job on making sure I was happy with the end results. I was very comfortable with having the crew in my home as they were polite and friendly.
Mary J. of North Collins, NY
Thursday, January 23rd
Overall, the customer service and labor provided was exceptional. The Production Manager, Steve, and his crew were very professional and provided excellent customer service. An open line of communication with us was always kept and we were routinely provided updates on the progress of the project. In addition, the work they completed (including support beams, walls, floors, trim, electrical work and doors) was done beautifully. The project was very customized to accomodate our short ceilings, odd angles and piping. The work is flawless and they have transformed our 1920's basement into a beautiful recreation room, which we are thoroughly enjoying!
Katie G. of Angola, NY
Friday, April 14th
The personnel I dealt with were personable and knowledgeable. The work supervisor reevaluated my dehumidifying/air filtration needs and adjusted the plan so that the integrity of my, "recreation room," walls was not compromised. The installers worked steadily and left a very clean space. I was completely satisfied with the flooring, trim and air quality work done.
Ellen S. of Orchard Park, NY
Friday, February 17th
I was most impressed with the contracting crew. They were impecably neat and took great care even to the smallest detail. I have never seen a group of work men who were so polite and well-mannered. i can't say enough about how wonderful they were! Also, the work was completed exactly on schedule. I have never had work done so efficiently even when, "little extras," were added. Very impressed!
Tammy S. of East Aurora, NY
Monday, February 13th 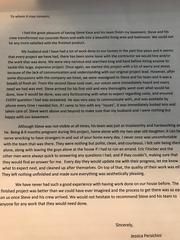 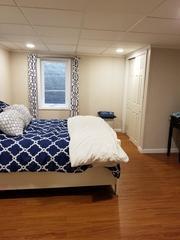 We needed to add extra space to our home. We decided to add a bedroom, bathroom and family room. We chose First Buffalo Total Basement Finishing because their products were the only mold resistant products we found on the market. Our crew was great and paid great attention to detail. We love the way the basement looks now! Our basement flooded during a storm after our basement was finished. Because the products were designed for basements, we had no problem with clean up & no mold concerns. We are so happy that we chose First Buffalo for our basement!
Traci S. of Williamsville, NY
Thursday, May 17th
I picked TBF because of the images on their website and the financing options that they offer.  They are pricy but do excellent work. The start of our project went a little rocky with some communication issues; but Mike (the owner of the company) called us and after that things improved dramatically. He helped us by giving us a project manager that talked with us more about our basement project and things were great. The installer in particular was ver conscientious and personable, and his work was great. We would consider TBF for any more remodeling that we do.
Jeff L. of Tonawanda, NY
Friday, December 14th
We chose Total Basement Finishing based on a referal from the Nextdoor Neighbor App.  And we are thrilled with our basement now! The install crew were amazing and everything was absolutly perfect. They worked extremely hard and did a wonderful job!  We are extremely happy with our basement now!
S. C. of Amherst, NY
Friday, July 24th
Total testimonials : 21