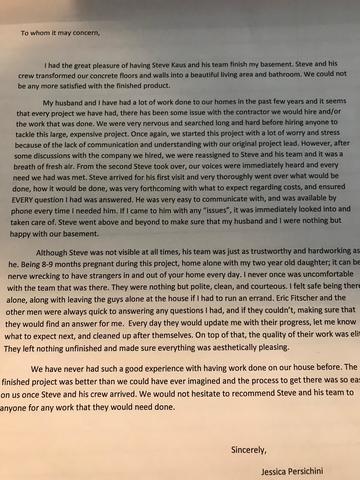 To whom it may concern,

I had the great pleasure of having Steve Kaus and his team finish my basement. Steve and his crew transformed our concrete floors and walls into a beautiful living area and bathroom. We could not be anymore satisfied with the finished product.

My husband and I have had a lot of work done to our homes in the past few years and it seems that every project we have had. There has been some issue with the contractor we would hire and/or the work that was done. We were very nervous and searched long and hard before hiring anyone to tackle this large, expensive project. Once again, we started this project with a lot of worry and stress because of the lack of communication and understanding with our original project lead. However, after some discussions with the company we hired, we were reassigned to Steve and his team and it was a breath of fresh air. From the second Steve took over, our voices were immediately heard and every need we had was met. Steve arrived for his first visit and very thoroughly went over what would be done, how it would be done, was very forthcoming with what to expect regarding costs, and ensured EVERY question I had was answered. He was very easy to communicate with, and was available by phone every time I needed him. If I came to him with any "issues," it was immediately looked into and taken care of. Steve went above and beyond to make sure that my husband and I were nothing but happy with our basement.

Although Steve was not visible at all times, his team was just as trustworthy and hardworking as he. Being 8-9 months pregnant during this project, home alone with my two year old daughter; it can be nerve wrecking to have strangers in and out of your home every day. I never once felt uncomfortable with the team that was there. They were nothing but polite, clean, and courteous. I felt safe being there alone, along with leaving the guys alone at the house if I had to run an errand. Eric Fitscher and the other men were always quick to answering any questions I had, and if the couldn't, making sure that they would find an answer for me. Every day they would update me with their progress, let me know what to expect next, and cleaned up after themselves. On top of that, the quality of their work was elite. They left nothing unfinished and made sure everything was aesthetically pleasing.

We have never had such a good experience with having work done on our house before. The finished project was better than we could have ever imagined and the process to get there was so easy on us once Steve and his crew arrived. We would not hesitate to recommend Steve and his team to anyone for any work that they would need done.

Back to Previous Page
Back to Testimonials